Associazione Nazionale Liuteria Artistica Italiana have announced an International Lutherie Competition for bowed instruments and classical guitars, which will be held from 1 to 21 May at the Biblioteca Ernesto Ragionieri in Sesto Fiorentino 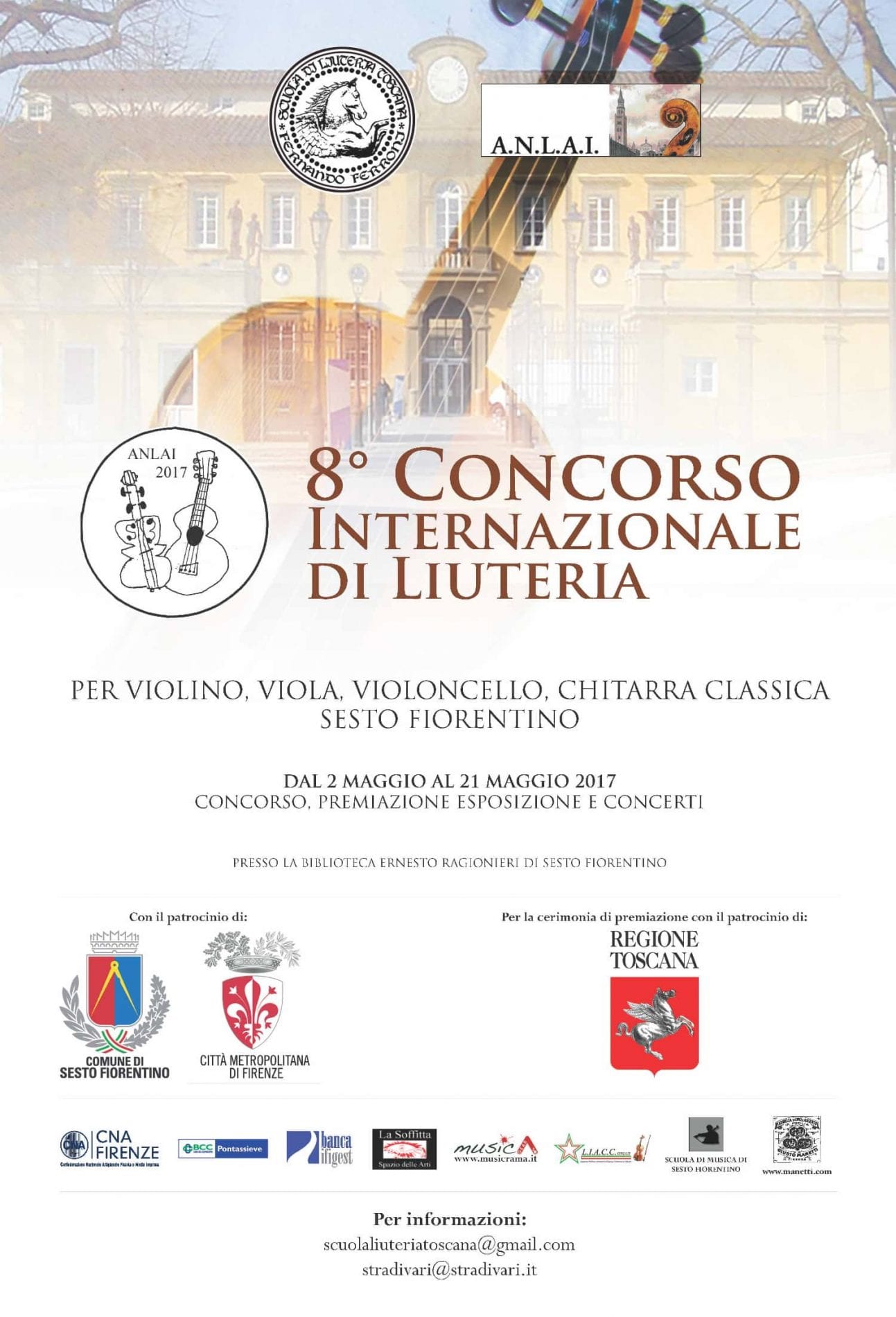 The competition is open to professional and non-professional luthiers and all stringed instrument makers and is divided into four categories, for violins, violas, cellos and classical guitars. The purpose of the event is to showcase the ancient art of lutherie, which covers design, construction and restoration, and to compare bowed stringed instruments (violins, cellos, violas and double basses) and plucked instruments (guitars, basses, mandolins, etc.). The name lutherie comes from “lute”, a plucked instrument used up until the Baroque era.

The ancient art of lutherie began in the early 16th century and developed throughout the Renaissance period. Its main development took place in Italy, particularly in Cremona, the city of the famous luthier Antonio Stradivari, who made stringed instruments including violins, violas, cellos, guitars and harps. He became recognised over time as one of the greatest luthiers, having made the art of lutherie renowned throughout the world. His instruments continue to be used by the greatest musicians, from the violinist Niccolò Paganini and the composer and theatrical impresario Giovanni Battista Viotti to the famous violinist of our own times, Uto Ughi. Today, Cremona is still the city where the art of violin-making finds its greatest expression. It is also the birthplace of the International School of Lutherie, managed by the “Antonio Stradivari” Consortium of Violin makers, which includes over 140 workshops in the city.

Lutherie is one of the few arts in which traditional manual craftsmanship continues to persevere, producing instruments of the highest quality. Hand-crafted production also allows various customisations that would be impossible in mass production. In this sense, we could mention the famous hand-painted cello by Andrea Amati, exhibited at the “André Mertens Galleries for Musical Instruments”. Amati’s famous cello was painted in oils in the style of “Limoges porcelain”, with coloured areas and designs depicting natural leaves outlined with thin black lines and embellished with real gold leaf.

For the occasion of the International Lutherie Competition, master craftsman Fabio Chiari, founder of Scuola di Liuteria Toscana, has designed and made a “lira”, a stringed musical instrument inspired by the famous lira of Leonardo da Vinci, made in 1500 and mentioned by Giorgio Vasari in his “Lives of the Most Excellent Painters and Sculptors”. Some historians, including Vasari himself, described how Leonardo da Vinci gave the Duke of Milan a silver lira shaped like a horse’s skull, with a very resonant sound. There is no longer any mention of this instrument made by Leonardo da Vinci in his surviving documents.

Later hypotheses suggest that Leonardo had made an in-depth study of equine anatomy and, having examined the shape of the skull, he tried using it as the sound box for a lira, an instrument that was very popular and widely used in the Renaissance era. The instruments were made in various sizes, with different ranges and tones. Therefore, three reconstructions have been made in various sizes: two “lire da braccio” and a “lira da gamba”, currently on display at the “Leonardo3 Museum” in Milan.

From the few lines written by Giorgio Vasari, master luthier Fabio Chiari was able to reconstruct Leonardo da Vinci’s version of the lira, starting from his interpretation of the inventor as a virile nude holding a bow. From that interpretation, after thorough investigation, Chiari discovered that the virile nude actually played a bowed “da braccio” instrument. Its reconstruction began from there, based on the types of bowed instruments in use during Leonardo’s time. Wooden materials from the Tuscan countryside were used, in addition to pear and boxwood for the small parts of the construction. The varnish has a natural resin base, like that used by Italian luthiers in around the 15th and 16th century.

The International Lutherie Competition is in its eighth year and, in addition to the award ceremony, it also features a series of concerts: the acoustic test will be conducted on 4 May and is open to the public. The event is made possible thanks to the patronage of the Municipality of Sesto Fiorentino and the Metropolitan City of Florence, and the award ceremony is supported by the Region of Tuscany. The sponsors of the competition include CNA Firenze, Banca di Credito Cooperativo di Pontassieve, Banca Ifigest, La Soffitta – Spazio delle Arti, Music rama, L.I.A.C.C. – Liuteria Italiana Autentica Classica Cremonese Onlus, La Scuola di Musica di Sesto Fiorentino and Giusto Manetti Battiloro.