If many reserves of precious materials exist on earth it’s just for unforeseeable circumstances; platin and gold, in fact, might be “rained down” on our planet more than 200 million years after its formation, when the earth was bombed by meteorites. This is the discovery announced by a group of researchers from the University of Bristol on the review “Nature”. When our planet was still young, more or less 3,9 billion years ago, the melted iron sank to the centre and formed the core, dragging out most of the precious metals, like platin and gold. Into the core, according to scientists, precious materials are present enough to cover the entire surface of the earth with a layer four meters thick. However, the precious metals are so much present also in the earth’s mantle, the silicate casing between surface and core. That’s why the researchers have considered the hypothesis of the overabundance of precious metals on earth as the result of an exceptional event, like a meteorite shower. This fact would have added another load of gold to the mantle compared to what was already there.

To prove this theory the scientists analyzed some rocks from Greenland, which are nearly 4000 years, collected by Stephen Moorbath from Oxford University. Those rocks provide a unique view on the composition of our planet shortly after the formation of the core and before this meteorite bombing. 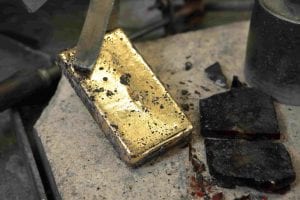 The researchers determined the isotopic composition of the Tungsten of these ancient rocks. The Tungsten is a very rare element (a gram of rock contains about one ten-millionth of a Tungsten gram) and, like gold and others precious elements, it was supposed to converge at the centre of the earth during its formation phase.

Like most of the elements, the Tungsten is composed with several isotopes, atoms with the same chemical characteristics, but with slightly different masses. The isotopes provide “fingerprints” of the material origin, moreover with the fall of meteorites on earth it seems that a significant mark of Tungsten presence was left on ancient rocks. From the analysis of these isotopes, in fact, the researchers found out significant changes in the quantities of isotopes 182W in the rocks of Greenland compared with modern rocks. This composition difference could demonstrate that the plenty of gold and others precious metals on earth could really be the result of the meteorites bombardment.

“Our job – commented Matthias Willbold, the study coordinator – shows that most part of the precious metals, which are at the roots of our economies and a key to the industrial processes became part of our planet for the luckiest coincidence, when the earth was strucked by about 20 trillion of asteroidal material”.