FROM THE GOLDEN AGE UNTIL TODAY, GOLD LEAF AND ITS WORKS OF ART

Gold has always been considered one of the most precious metals. It emanates a radiant light capable of transmitting heat, movement and energy. Its malleability and especially its resistance to external agents have made it the most used metal since prehistoric times.

In ancient times, gold was associated with glory and the sun. Precious items like jewellery were made from it and it was used as a currency of exchange. In art, it was associated with the solar deities. We find it as an ornament on the outside of the pyramids, obelisks, as a decorative element inside the tombs and temples. Greek myths also represented divine substance with gold. An example is the myth of the god Eos, personification of Aurora and Helium, who carries the sun on a cart during the day, before immersing in a golden cup at sunset. As well as its association with the sun, gold is a symbol of incorruptibility and immutability, of all that is sacred and eternal. To ensure that Danae, daughter of Acrisius, bore a male child, the god Zeus turned into golden rain to penetrate the underground where she was locked up.

Used in mosaics since early Christian times, gold was a symbol of otherworldly light and divine spirituality. Its first traces can be found in paint in Byzantine art where, because of its bright and abstract colour, it was used to represent sacred objects and show devotion.

Gold leaf shone in the background of Byzantine icons, allowing the painted subjects to be intangible and belonging to an otherworldly, timeless dimension. The philosophical reference in the realisation of the icons came from the theories of Plotinus, master of light aesthetics and one of the most important philosophers in antiquity, Plato’s heir and father of Neo-Platonism. The divine light in the holy icons was expressed through gold. The gilding of the background is the representation of this otherworldly and sacred light observed in the paintings of the most ancient Byzantine age. The golden background disappeared from Western art at the end of the first Renaissance, while remaining one of the elements of religious painting in Eastern Europe.

With the advent of contemporary art in the nineteenth century, many artists reinterpreted past techniques with completely new applications. The Viennese artist Gustav Klimt is certainly one of the greatest artists using gold in his works of 1900. After a series of visits to Ravenna, he was enchanted by the strong presence of gold in the mosaics. This visit was the main inspiration in giving life to his ‘golden period’ that featured gold leaf in most of his paintings.

The painting ‘Judith I’ made in 1901, is considered the first work of the golden period, with a massive presence of gold in the painting. The female subject protagonist of the picture is used as a metaphor of women’s power of seduction. The figure of Judith glorifies the cruel and seductive femme fatale, which leads to the ruin and death of her lover. The painter portrays the heroine as a modern woman in Vienna’s high society. The gold leaf shines both in the background and on her collar, tight around her neck.

The use of gold leaf in art has been passed down to the present day. Many artists still learn the various techniques of gilding, whose origins date back to ancient times. Nature, sacredness, the emphasis of human beauty combined with the creation of different light effects: these are some of the reasons that make gold one of the protagonists of famous paintings and works around the world.

Juuri was born in Tokyo but has lived in Oklahoma City since childhood. After earning a degree in graphic design, she began to rediscover the Japanese culture she had been away for so long. Her paintings depict the beauty of Japanese culture, pulling together tradition and modernity, but maintaining a sense of modern aesthetics, similar to punk. The message Juuri aims to convey to her audience is a combination of simplicity, peace and exotic beauty. Through them the viewer can penetrate Japan’s customs and colours, the main source of inspiration for Juuri.

In one of her paintings, ‘The Standing Death of Ben-Kei San Sebastiano’, the artist illustrates, the story of two men fighting. On the one hand San Sebastian, persecuted for his Christian faith and sentenced to death, is depicted standing, tied to a tree with arrows piercing the skin. The other is Ben-Kei, a Buddhist monk and Japanese soldier who fought to the death to protect his master. These two stories depict the will to survive and the strength to protect their beliefs to the end. 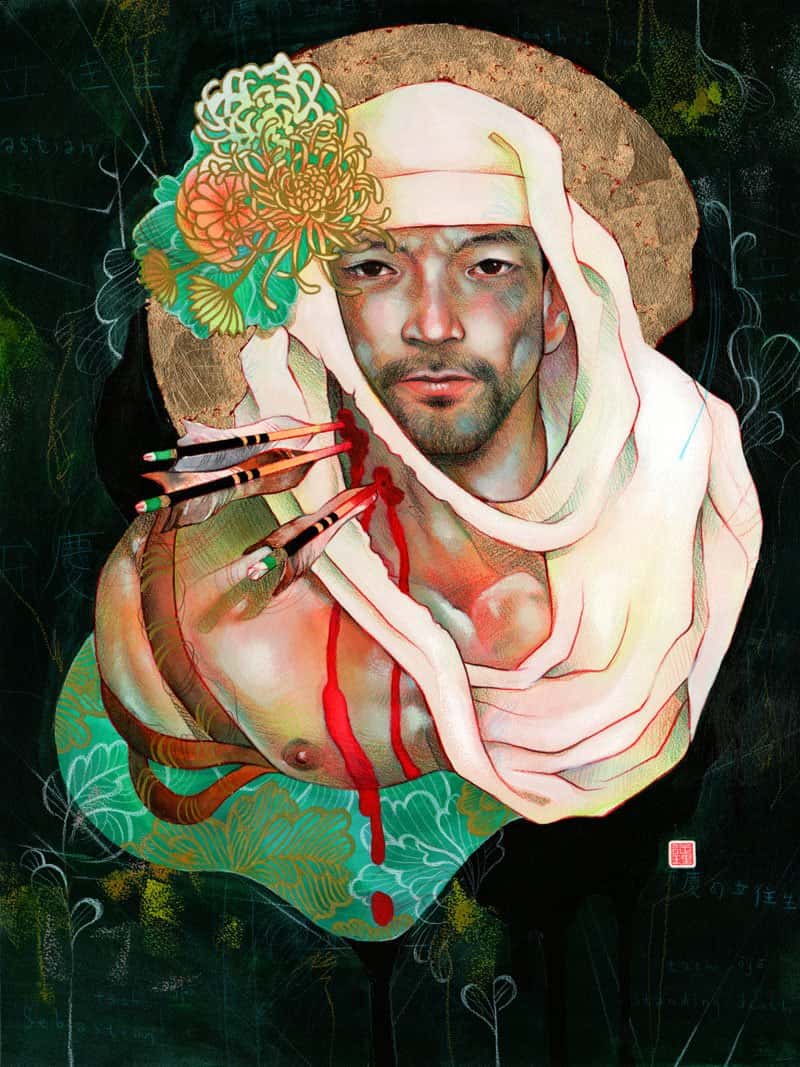 Kevin Ledo is a Canadian artist who currently lives in Montreal. His works, mostly murals, are suspended in a minimalist world that is a bit surreal, where human figures are intertwined with stylised art forms. The artist is very often inspired by his photographic works and, in some cases, the protagonists are ordinary people, living their everyday life.

Kevin Ledo’s works feature different types of acrylic paint and gold leaf, combining the various materials into a single painting. The major sources of inspiration for Kevin Ledo are iconography, travels around the world, music, graphics, photography, psychology, and Buddhist philosophy. He has created murals and exhibited his works around the world, from Canada to the United States and Belgium. 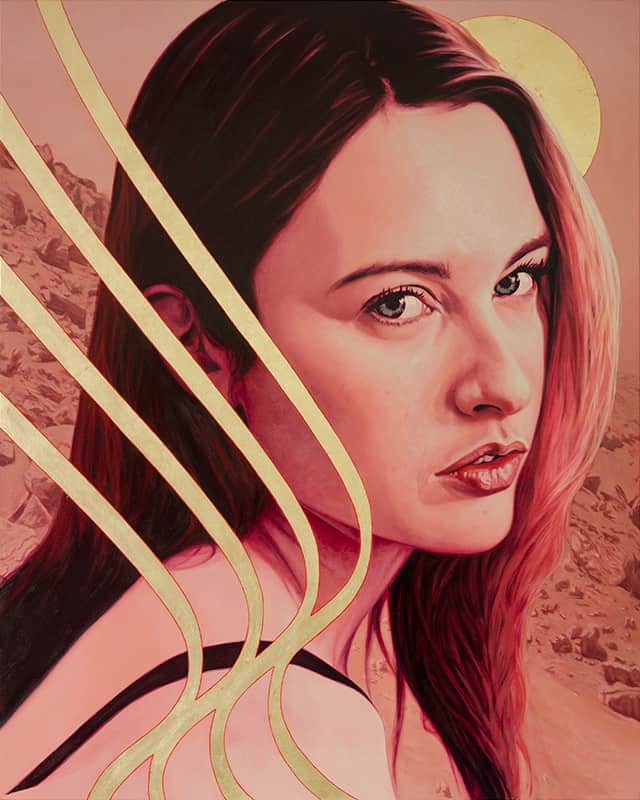 KEVIN LEDO: Martian Woman: wherever we go, there we are | Oil and gold leaf on canvas.

Brad Kunkle is an American artist and painter who lives and works in New York. His works, whose protagonists are women surrounded by nature, are a fusion between realism, fantasy and psychological depth. He started using gold after a trip to the Louvre Museum in Paris. He was inspired by the gilded ceilings and decided to start including gold in his paintings. The women depicted are at one with nature, they are nature itself. In these paintings the lighting is different depending on the angle from which the work is observed. Butterflies, birds and leaves surround Kunkle’s otherworldly women in energy vortexes, as if their bodies were about to dematerialise and turn into these natural and delicate things. 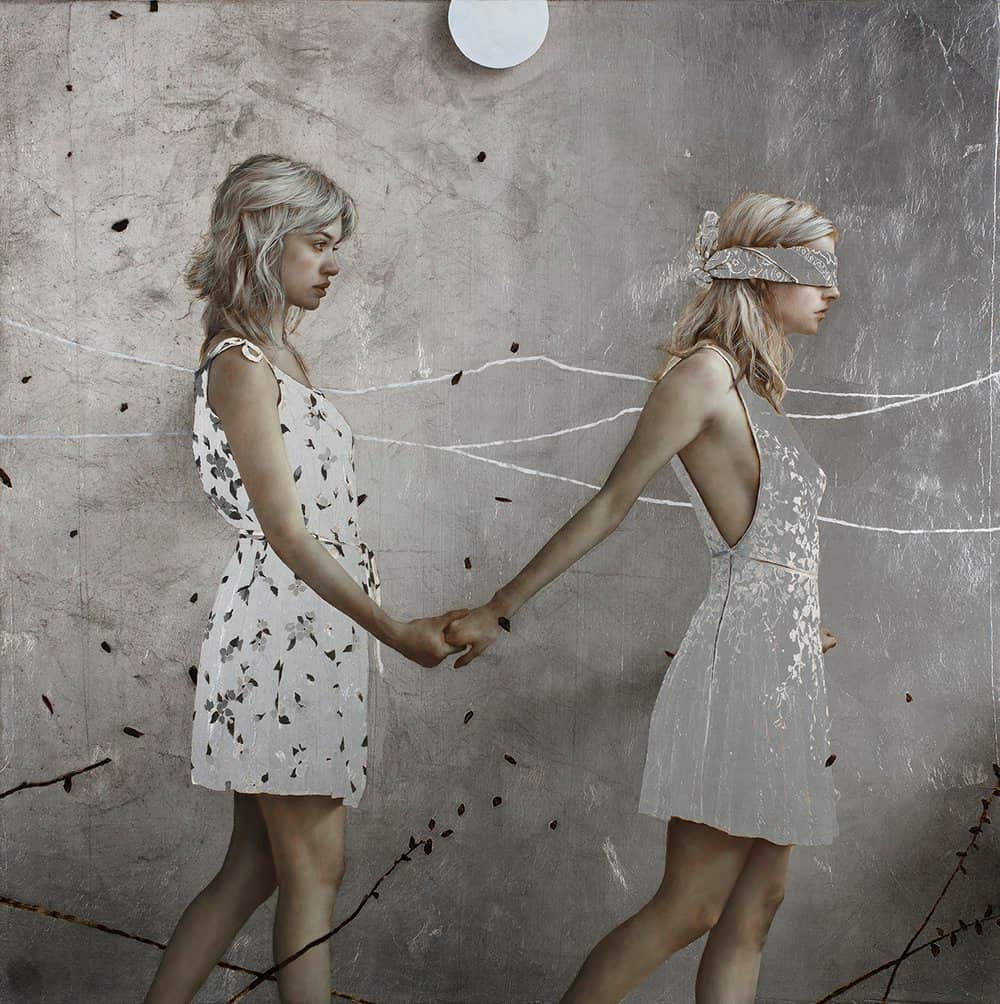 Francesca Nicoli is an Italian artist, born in Terni. She always had the desire to express herself through art and, as a young woman, she began a personal quest to communicate particular emotions and feelings of her inner world and discover the positive influence that contact with nature has on her creativity, inspiring her canvases.

After earning her degree in Painting at the Academy of Fine Arts in Terni, she got the professional qualification of Set Decorator and Sculptor. She has exhibited her works both in private galleries and in institutional settings.

Currently she continues to pursue the path taken in the field of painting and decoration, and has won awards such as the ‘Eureka’ First Prize in Rome. Gold leaf is the mainstay in most of her paintings. ‘It’s thanks to gold leaf that my works acquire an intense special glow – says Francesca about her works of art with gold leaf – and come to life. I love nature, its colours, its forms. Use of gold leaf allows me to give light and to emphasise what my eyes see and interpret my emotions. This is how works such as ‘l’Incanto del bosco’, following a holiday in the Dolomites, or ‘Il Ballo del mare’ where I use silver leaf to highlight the light that filters through the water, were created. Another important reason why I love gold leaf is definitely because it makes me feel closer to God, to his grace, it helps me to express my faith and celebrate life’. 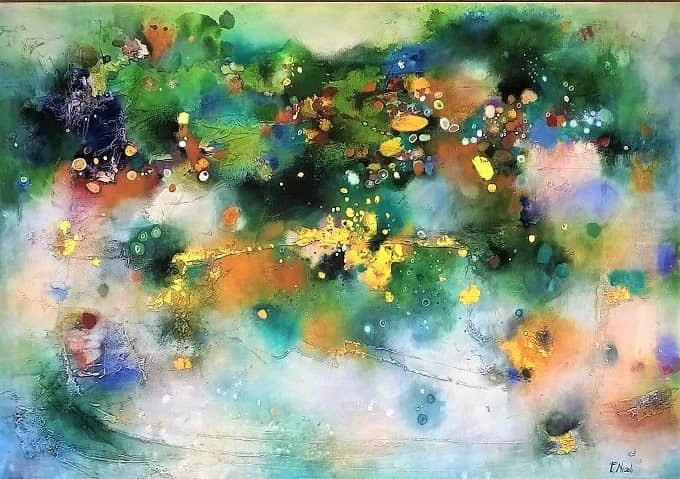